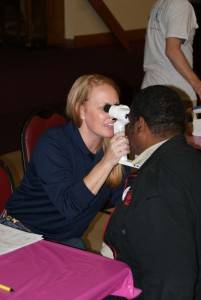 Myopia is on the the fastest growing ocular disorders in the country and all over the world. It has risen from an estimated 25% of the population to 40% of the population in the United States as of the latest statistical estimations. Myopia is the medical term used to denote short sightedness. This is a condition where a person can see clearly close by, however has difficulty focusing on objects that are far away. New-born children are born with far sightedness and then a period of adjustment takes place by the body that should ideally result in perfect vision.

How is Myopia caused?

Children as young as 8 years old can develop Myopia and that can be cause of concern for the parents. It has been statistically proven that children who develop Myopia younger in age are more prone to developing associated complication in later life. One of the most common questions that I get asked in my practice is the reason behind rapid Myopic progression in children. Myopia is a refractive error caused due to the eye being too elongated for its optical power and can easily be corrected by the use of spectacles or contact lenses. As the body grows, so does the eye and this again changes the amount of correction required for perfect vision. Once the child has completed their growth spurts, around the age of 18, the corrective power should stabilize and settle down.

Can Myopia Progression be slowed down?

This is something that has attracted a lot of attention in the medical community, and while a lot of progress has been made in the correct direction, the exact answer still eludes us. I have used some of the methods at the cutting edge of current research and found a few to have real promise. The use of Atropine drops is one which is based on sound scientific evidence since it deals with the issue of focusing fatigue, one of the prime reasons of Myopia progression. A number of studies published over the last decade have shown the rate of progression to fall by as much as 81% through the use of atropine drops. The use of Orthokeratology or corneal reshaping lenses has also seen a number of positive effects in decreasing the progression of Myopia. These gas permeable lenses only need to be worn during night in most cases. The studies conducted on their use and effects have concluded an average of 50% improvement in progression of Myopia. The use of multifocal lenses and eyeglasses has also been investigated, however in my opinion the cost-benefit ratio still needs to come down for it to be an effective tool in real world conditions.Under corrected eye lenses also seem to be one of the things that parents enquire about often, however there is no scientific evidence to support that line of treatment. Conclusion Early detection and correction of Myopia remains key to slowing down the progress as much as possible and ensure that there are the least amount of complications in adulthood. The methods at our disposal to stop the progression of Myopia are growing and this trend is only set to continue further. Remember, myopia is a fully correctable eye condition with glasses or contacts. Also, wearing glasses or contacts will not make your condition worse. Normal aging will do that no matter what. So, don't suffer seeing blurry all day when you could be enjoying the world it all it’s glory.